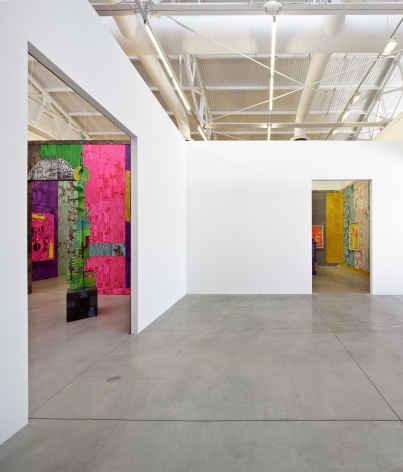 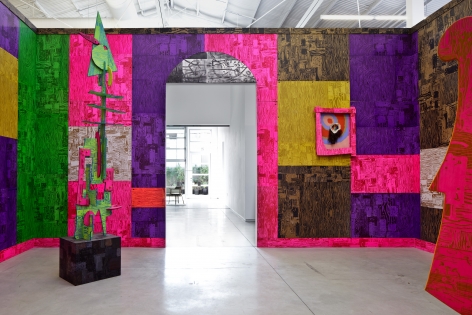 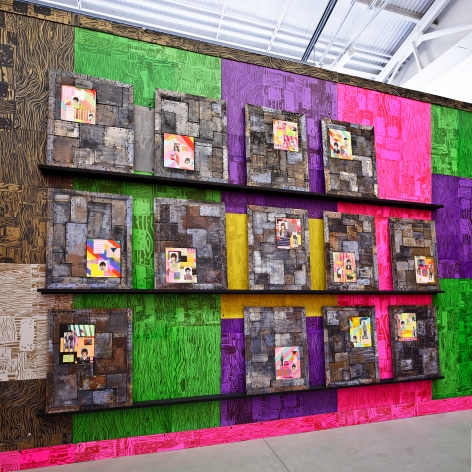 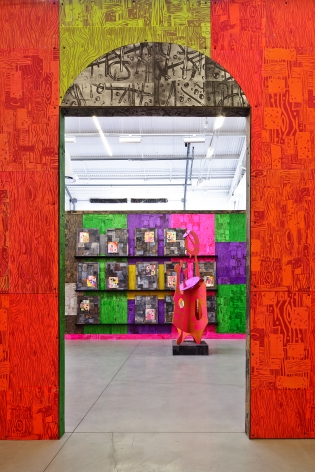 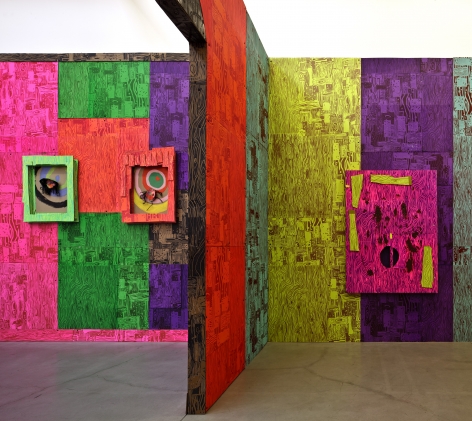 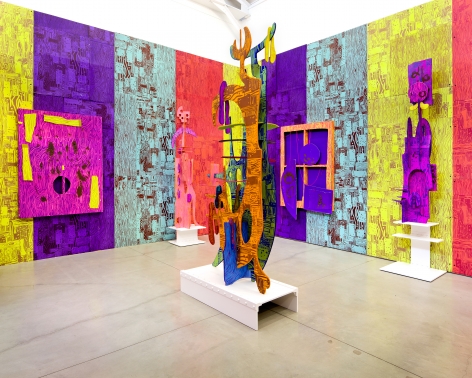 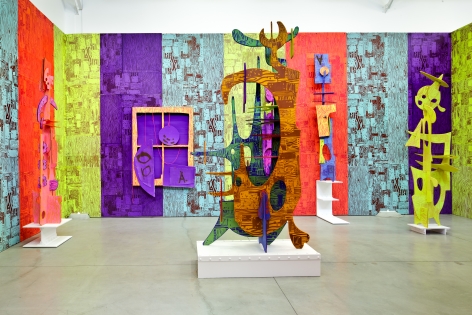 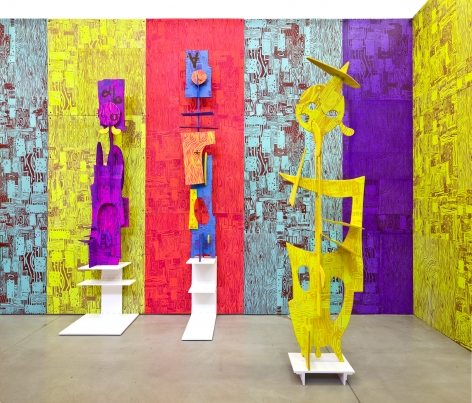 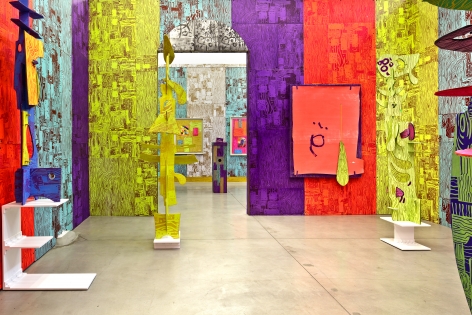 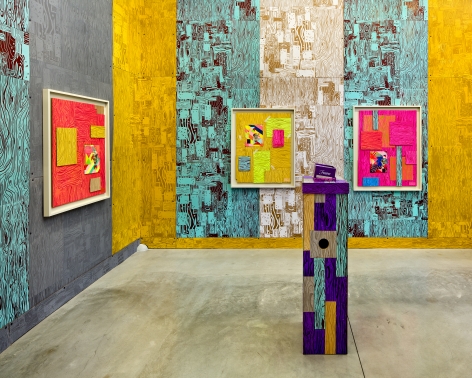 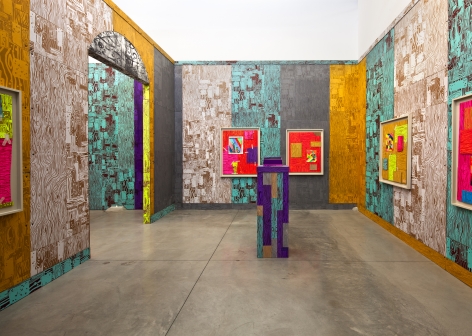 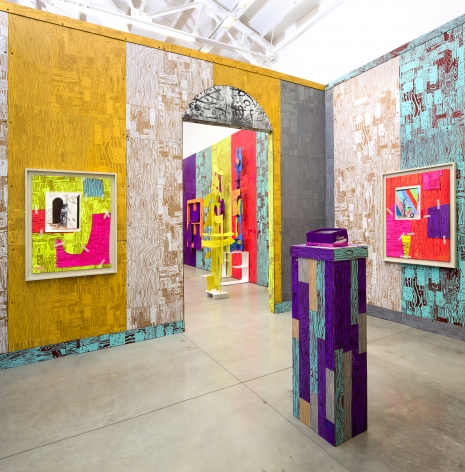 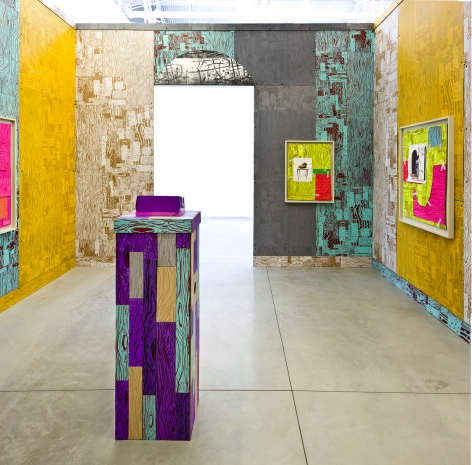 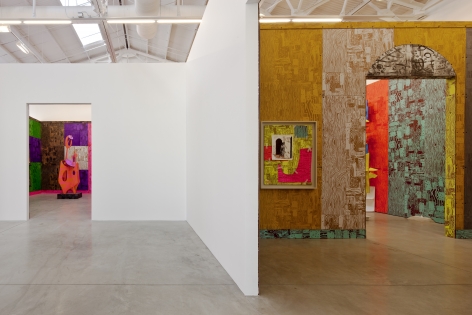 David Kordansky Gallery is pleased to present Cornfabulation, a collaborative exhibition by Aaron Curry and Richard Hawkins. Though both artists are originally from Texas, and Curry was Hawkins' student at Art Center College of Design in the early 2000s, the exhibition goes far beyond notions of camaraderie or shared influence.

Works made by each artist individually, as well as by the two together, will be installed in an immersive environment that synthesizes their visual and material concerns. Collages, sculptures, paintings and drawings on paper, and hybrid works incorporating diverse media are juxtaposed against––and often made from––the elements that surround them. Accordingly, the upending of traditional hierarchical relationships between sculptures and bases, compositions and frames, and high and low cultural forms, becomes a recurring theme in the work.

Cornfabulation, the exhibition's title, gets to the heart of Curry and Hawkins' willingness to forgo cosmopolitan restraint for a more down-home, libidinal approach to aesthetic invention. The installation consists of three rooms covered in cardboard 'wallpaper,' on which a cartoonish wood grain pattern is laid over colorfully graphic striping. While reminiscent of motifs recently found on sculptures by Curry and in paintings by Hawkins, the wallpaper replaces the neutrality of the white cube with the aura of an imaginary haunted house full of honky-tonk curiosities. It also finds its way into many of the works themselves, as either a framing device, a compositional element, or both. Collaborative collages combine small paintings of floating zombie heads and Japanese boys with fragments of screened cardboard; in these works, the patterning takes on a double life as both a pictorial and a sculptural agent.

Part obsession, part décor, in the context of Cornfabulation the wallpaper becomes an example of how both artists move freely between looking and making, between experiencing culture as exhibitionist voyeurs and making active use of its tropes to construct new objects. In Curry's biomorphic sculptures, for instance, art historical icons are shredded into the disjecta of video games, science fiction, and comic books. And in Hawkins' ever-expanding vocabulary of material strategies, desire leads the way through thickets of narrative digression, theoretical insight, and visual invention. The works they have made together do not necessarily meld these sensibilities, but rather allow the disjunctions that separate them to become spaces for strange new typologies.

For instance, in a series of collaborative works the artists call 'Trophies', frames made of screened cardboard surround conglomerations of hair and slapdash geometric abstractions. Like mounted heads, they are souvenirs poached from a landscape littered with carcasses, a country where commonly held notions of queer and straight have been left behind to rot in the California sun. Such stubborn insistence on genre confusion marks much of the work on view. How else to describe the hybrid works that position Curry sculptures on bases which have been painted by Hawkins to look like weathered and riveted metal, and that also refer to Hawkins' own recent 'dungeon door' paintings?

Similarly thorny questions are raised by Karen Black Forever, in which a found shoebox, perched on a pedestal covered with cardboard collage, contains not the eponymous pair of black 'Karen' shoes, but the latest iteration of Hawkins' shredded mask sculptures. Text, popular culture, and the aesthetics of working class apparel orbit around the formal conundrums that drive the creation of the work: vertiginous strata of pedestals upon pedestals, of calibrated materials and colors serving drastically different ends, and of competing and collaborative authorships. Here, elsewhere, and everywhere throughout Cornfabulation, cultural digressions are mistaken for master narratives as Hawkins and Curry delight in their slavishness to the lustful pleasures of each other's work.

Aaron Curry's work has been seen recently in Tableaux, MAGASIN - Centre National d'Art Contemporain, Grenoble, France; We Will Live, We Will See, Zabludowicz Collection, London; Lustwarande '11 - Raw, park De Oude Warande, Tilburg, The Netherlands; Secret Societies. To Know, To Dare, To Will, To Keep Silence, Schirn Kunsthalle Frankfurt, Frankfurt, Germany; CAPC de Bordeaux, Bordeaux, France; and Seeing Is a Kind of Thinking: A Jim Nutt Companion, Museum of Contemporary Art, Chicago. Earlier this year he was the subject of a solo exhibition at the Schinkel Pavilion, Berlin. 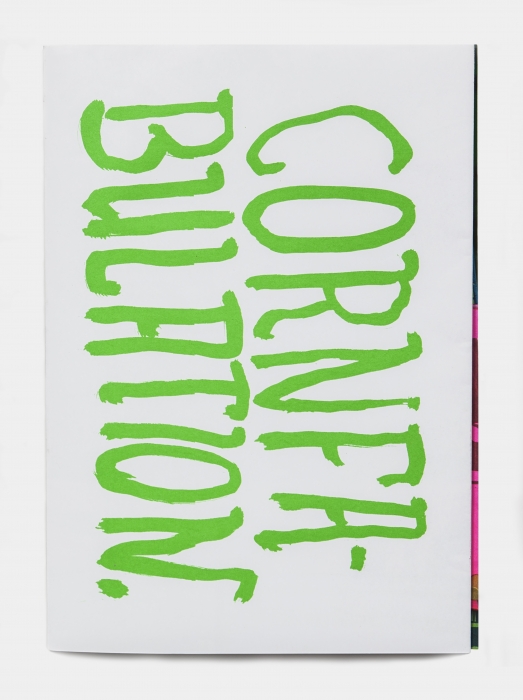