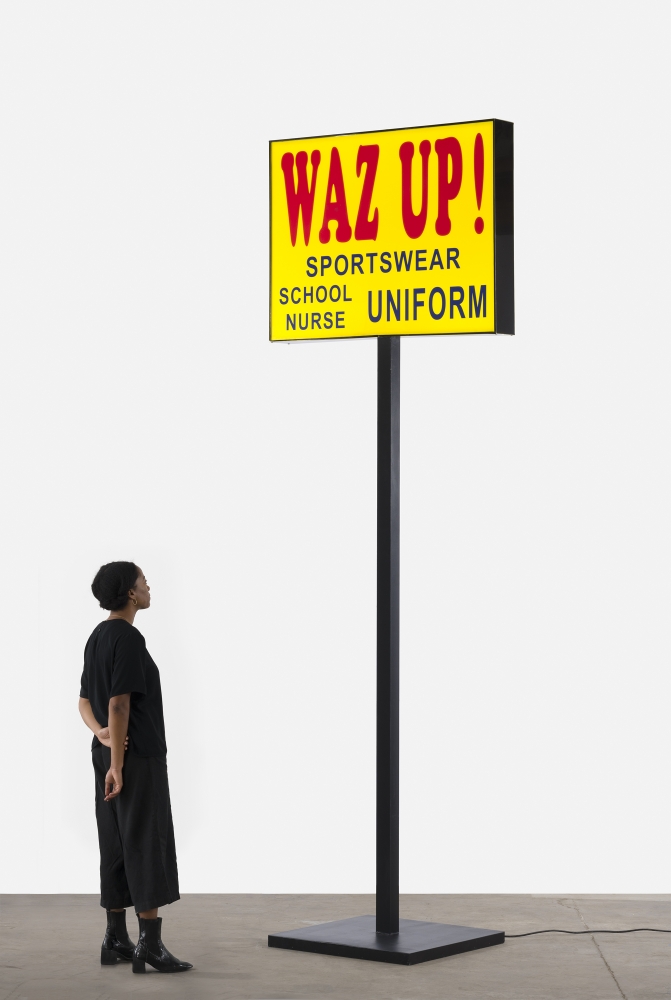 "These works are like South Central L.A. business taxidermy," Halsey says of several pieces in her new sculptural installations. She arranges the large cubes and prisms—a play on the "big box" retail developments that often replace local, independent retailers—in assemblages which evoke bristling city blocks. Halsey has divided the sculptures into two styles or "districts": brightly colored distillations of thriving or defunct enterprises and foil enwrapped structures that extend and sample the personal, Black-media-enriched mythography that has run through a number of her past projects.

Yet in contrast with Halsey’s most recent exhibitions, where architecture was scaled for human use (The Crenshaw District Hieroglyph Project at the Hammer Museum, 2018–2019) or immersion (we still here, there at MOCA, Los Angeles, 2018), the new works take a more dreamlike approach to size. An image of a soda bottle on a six-foot-tall, narrow rectangular prism suggests a vending machine, a liquor store, or a 20-oz. soda itself, dramatically growing or shrinking in relation to viewers as their perspective shifts.

Works like the soda bottle feature bright but flatly painted surfaces. Interrupting these saturated chromatic fields, Halsey has rendered stylized reproductions of original signage and logos, ranging from vernacular to corporate aesthetics. While this technique places her legibly in the tradition of 20th century Pop artists, Halsey is equally interested in artists like Jasper "Brush Master" Travis of Indianapolis and other sign painters who work for mom-and-pop businesses in communities like Watts. For example, one large, bright purple box features a hand-painted copy of a local hair shop’s sign.

The precarity and sometimes outright loss of businesses like this troubles Halsey, whose practice, with its embrace of the signifiers of Black social cultures—cultures and socialites she still lives in—must navigate the tension between representing and commodifying her neighborhood and others like it. In response to the complicated relationship between an art world and gentrification, Halsey seeks to resist acting as an anthropological guide by leaning into the intervening artifice of her funk-infused imagination. "I position myself as a fantasy architect in conversation with Superstudio and their Archigram/speculative architecture project," she says.

In past works, she critically proposed spaces for futurity. The grottoes of her Kingdom Splurge series were prototypes for urban gardens set up to prep attendants for transcendent trips. The Crenshaw District Hieroglyph Project looked to the past to see a way around to a better present: the corridors and chambers could be occupied, even if they should ultimately be occupied in South Central someday.

The works in this show constitute Halsey’s recollected spectral metro. More a map of ghosts than an exercise in urban planning. The vivid boxes, like platonic ideas of buildings, can’t be entered. What’s more, many of the businesses commemorated on them are gone now, thus inaccessible. Halsey isn’t reproducing South Central Los Angeles, or even trying to render her own version of it. Instead, via glyphic narratives, the self-reflection of her mythography, visual samples of uprising tags from 1965 and 1992, and her vivid abstracting of the business reproductions, she creates structures that ask us to see how she remembers what’s being erased. These monuments bid us remember: the past has come and gone; the present is already too late.

The memorial and the monumental intersect in Halsey’s blocks—as they do on the blocks on which she lives and where some of the businesses Halsey references are "fortified and strong," while others are shuttered. Graffiti indicates and recalls, announces, and at times, eulogizes. A close examination of several of the works’ surfaces reveals that in addition to paint, Halsey is making inscriptions in pencil. Here, she is taking up the techniques—if not materials—many tag writers use in her neighborhood. Graffiti written thusly is less noticeable and less costly to remove; each work demonstrates an anticipation of erasure.

Against such removal, Halsey’s foil blocks are marked primarily with neither paint nor pencil. They are, instead, mostly carved. The gravity of "the graven image" has drawn Halsey since her 2014 residency at the Studio Museum in Harlem. The metallic film is highly reflective, on the one hand, placing the viewer into the mythos; yet, because the carving cuts through the foil into the foam material behind it, iconography etched there will also be excised from the viewer’s reflected image. No relief. Except in memory.

Earlier this year, Lauren Halsey (b. 1987, Los Angeles, where she continues to live and work) was the subject of a solo exhibition at Fondation Louis Vuitton, Paris; she was also the subject of a solo exhibition at the Museum of Contemporary Art, Los Angeles in 2018. She won the 2018 Mohn Award, given by the Hammer Museum to an artist participating in its Made in L.A. biennial exhibition. Other recent group exhibitions include It’s Urgent!, curated by Hans Ulrich Obrist, Kunsthal Charlottenborg, Copenhagen (2019); Close to the Edge: The Birth of Hip-Hop Architecture, Center for Architecture, New York (2018); PopRally TEN, Museum of Modern Art, New York (2016); Radio Imagination: Artists in the Archive of Octavia E. Butler, Armory Center for the Arts, Pasadena, California (2016); and Everything, Everyday: Artists in Residence 2014–2015, The Studio Museum in Harlem, New York (2015).