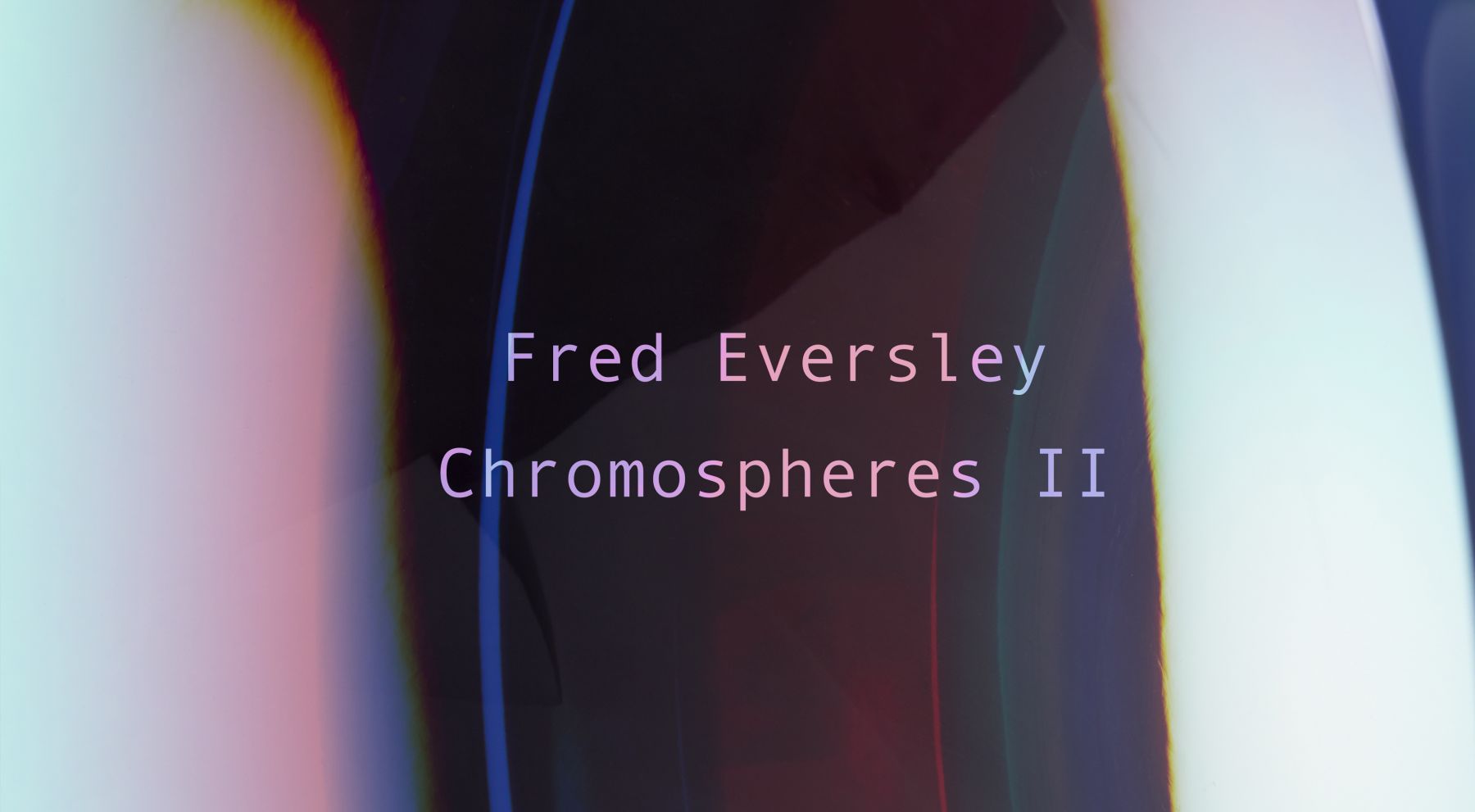 A key figure in the Light and Space movement and one of the most representative artists based in Los Angeles during the postwar period, Fred Eversley has dedicated a significant portion of his five-decade-plus career to the production of the Parabolic Lenses that are his signal achievement. These objects, which also constitute one of the most sustained and iconic bodies of work in American minimalism, are ravishing visual conundrums whose subjects are no less than the movement of energy—including light, sound, and even metaphysical forces—and the mechanisms of perception.

Fred Eversley: Chromospheres II is now closed. To inquire about available works by Fred Eversley, please send us an email here, or click "INQUIRE" below.

Important for historical reasons, Eversley’s recent lenses are equally significant for technical ones: until a late burst of creative output necessitated in part by the threat of losing the Venice Beach studio he had occupied for nearly 50 years, the artist had not attempted three- and two-color sculptures of this kind since the 1970s. They therefore represent both a return and a bold step forward, enhancing a lifetime’s worth of insight with a new desire to push the boundaries of his own time-honored formulas and practices, and closing the circle on a half-century’s worth of art making. 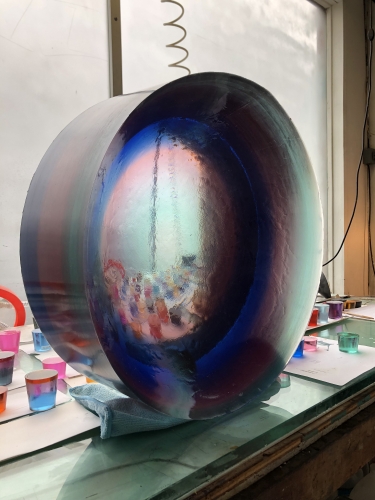 With an instinctual feel for the resin, dyes, and catalysts he has used to produce such works since 1969, Eversley generates an astonishing array of effects. He begins by pouring dyed polyester resin, in varying layers of thickness, into a circular mold attached to a motor. Spinning the mold at different speeds changes the shape of the resulting parabolic curve that defines each lens. He also controls and often plays with the permeability of any single layer—and each color—by adjusting the amount of catalyst added to the resin, thereby altering the time the pour takes to set, and choosing the degree to which it blends into the next.

Eversley’s intention for the color scheme of each work determines the interaction between the hues, their individual saturation and brightness, as well as the relationships between adjacent layers. Some colors blend into one another while others hold distinct edges; opacity and translucency vary depending on the thickness of the layers and the type and proportion of the dyes or pigments utilized. Optical spaces proliferate on and within the volumetric surfaces of each sculpture, especially as the viewer moves around the lens-form and observes the world reflected and concentrated in its parabolic concavity. Eversley’s devotion to the parabola lies in its unique properties as the only shape in nature that focuses energy toward a single point. Accordingly, in the presence of a lens sculpture and its distortions of the surrounding environment, seeing becomes an altered experience; but so do hearing and spatial awareness, which respond in unexpected ways as the viewer approaches.

These qualities fully materialize only after a lengthy, physically demanding polishing process that completes the transformation of each work from inert material into a radiant, charged object. Every lens is a unique, decidedly handmade thing, the final form of which he can anticipate but never fully predict. Planning and making are executed by Eversley in the studio using specially outfitted machines he built himself. Eschewing outsourced fabrication, he is a relentless experimenter who carefully records his research and results, adjusting variables and subtly adapting his approach as he goes.

Fred Eversley in the polishing room at his Venice Beach studio, 2019, Photo by Maria Larsson

Fred Eversley in the polishing room at his Venice Beach studio, 2019, Photo by Maria Larsson

The three lenses featured in Chromospheres II are among the very last Eversley made before he was forced to vacate his Venice Beach studio at 1110 Abbot Kinney Blvd., where he lived and worked from 1969 until 2019. Now a Los Angeles Historic-Cultural Monument, the building was formerly occupied by the maverick American composer and instrument-builder Harry Partch, as well as the painter John Altoon, for whom architect Frank Gehry originally designed its live-work interior. The location on Abbot Kinney, a central thoroughfare in Venice, served as a de facto hub for artists associated with the Light and Space movement; John McCracken lived next door, and he and Eversley would exchange ideas and physical assistance on larger projects.

The lens sculptures emerged organically from this milieu. They are expressions of a generative sense of possibility that not only changed art, but saw the establishment of new connections between artists, scientists, and engineers. Novel materials and technologies fueling the growth of the automotive and aerospace industries in Southern California quickly found their ways into the hands of artists, who employed them—in often idiosyncratic ways—to create forms that harnessed enduring, primal forces of nature while evoking a sense of wonder and futuristic potential.

Eversley first settled in Venice Beach in 1963. He was a young aerospace engineer who had relocated from his native New York, and Venice was one of the few beach communities that accepted black residents. A 1967 car accident forced him onto crutches, keeping him out of the draft during the Vietnam War and prompting him to reconsider his vocation. His ongoing interest in photography, which he learned from his grandfather, led to a job documenting Frank Stella’s Black Series for the print workshop Gemini G.E.L. On his own, Eversley started a series of optical experiments involving the encapsulation of photographs in layers of resin. He soon realized that the properties of the resin augmented perception in unique and compelling ways.

Footage captured during the final months of Fred Eversley's art making in his Venice Beach studio, late 2018 and early 2019, Music by Bobbie Johnston

Eversley’s scientific curiosity and penchant for experimentation started in his childhood (his father was also an aerospace engineer). His knowledge and experience quickly grew during his university years at the Carnegie Institute of Technology, after which he designed high-intensity acoustical testing laboratories for NASA as part of the Gemini and Apollo programs. Immersion in the Venice Beach scene, surrounded by encouraging artist friends like Altoon, McCracken, and Larry Bell, quickly led to a decision to pursue artmaking full-time.

Since then, the lenses have come to embody the physical and mental environments of coastal Los Angeles, providing Eversley with an ever-evolving forum in which to respond to the region’s palpable light, the philosophical and intellectual currents that surround him, and his mind’s never-ending attraction to the unsolved mysteries of the cosmos. These fascinations drive the evolution of the lenses’ poetry, imbuing them with universal properties that transcend any one time or place. Each crystallizes principles of energy that animate the atmospheres in which we live, giving physical form to what we see not only with our eyes, but with our minds and imaginations. 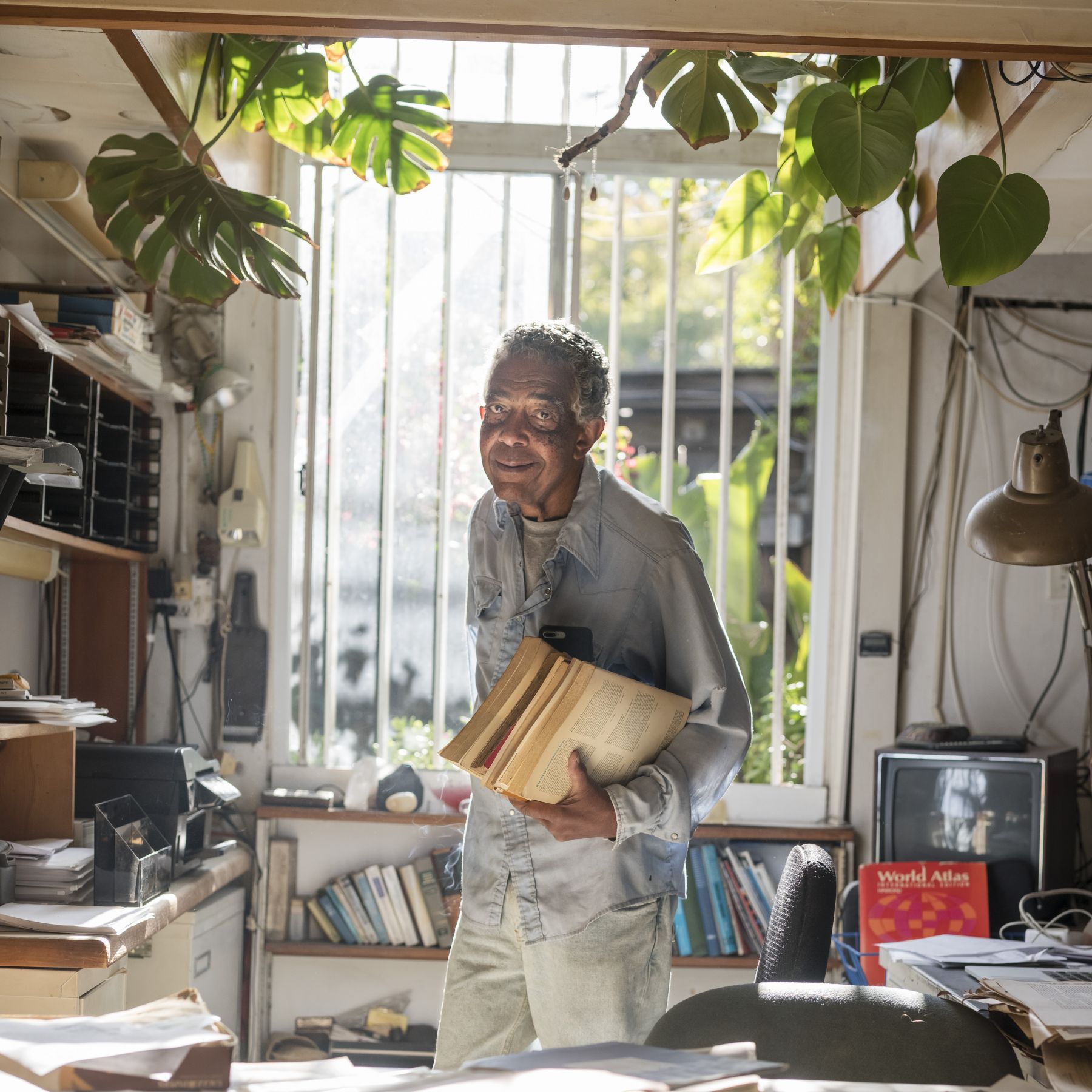 Every effort has been made to reach the copyright holders and obtain permission to reproduce the above material. Please get in touch with any inquiries or any information relating to unattributed content.